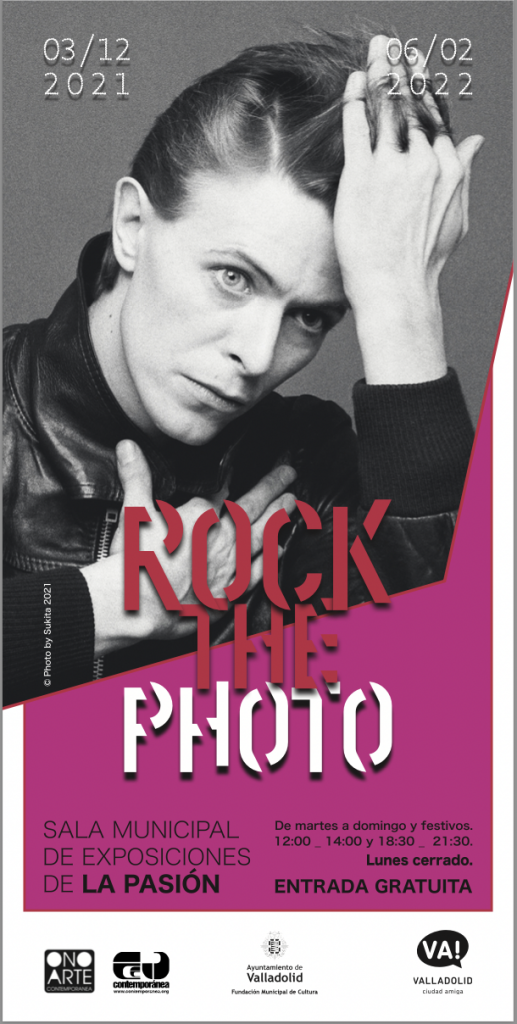 The exhibition includes the mythical and well-known images of 100 myths in the History of rock music through the lenses of 40 best-known photographers and it condenses the vitality of rock and its social impact, but also reveals those moments that music fans never see: unpublished behind-the-scenes photographs; innocent moments of the artists in their youth at the beginning of their careers; backstage images; live or conceptual images; author’s portraits that cross the superficial to enter the soul of the musicians; and interior photos and album covers.

The relationship between photography and rock is the story of a well-matched marriage. In fact, the secret history of rock can be explained through photographs. After all, it is the most plastic and dynamic musical genre in history.   “Rock the Photo” is a unique opportunity to enjoy the gathering of forty of the best classic rock pho- tographers, such as Masayoshi Sukita, Robert Freeman, Duffy, Richard Kern, Michael Putland, Debo- rah Feingold, Michael Lavine, Allan Tannenbaum, Baron Wolman , Robert Whitaker, Peter Boettcher, Danny Fields, Peter Cunningham, Martyn Goddard, Charles Peterson, etc. Conceived as a chronicle of the History of Rock through the lenses of those best photographers of the 20th century, the exhibition is a chronological journey from the beginnings of rock and roll history to the present days.

This website uses cookies to improve your experience while you navigate through the website. Out of these cookies, the cookies that are categorized as necessary are stored on your browser as they are essential for the working of basic functionalities of the website. We also use third-party cookies that help us analyze and understand how you use this website. These cookies will be stored in your browser only with your consent. You also have the option to opt-out of these cookies. But opting out of some of these cookies may have an effect on your browsing experience.
Necessary Sempre abilitato
Necessary cookies are absolutely essential for the website to function properly. This category only includes cookies that ensures basic functionalities and security features of the website. These cookies do not store any personal information.
Non-necessary
Any cookies that may not be particularly necessary for the website to function and is used specifically to collect user personal data via analytics, ads, other embedded contents are termed as non-necessary cookies. It is mandatory to procure user consent prior to running these cookies on your website.
ACCETTA E SALVA